Can we just take a second...It's NOVEMEBER?!  Say what?!  I seriously can't believe it.  One month ago today I was saying a tearful goodbye to all you beautiful people and now I'm emailing you for my second to last time before I'm bouncing out of the MTC.  It's nuts.

So some good news, I am no longer sick!  BUT, my companion is.  We thought she'd get out of here unscathed but that darn MTC plague gets everybody.  So we've been trying to keep her rested and get her healthy again while still having class for 9+ hours a day...super fun stuff!  Luckily, yesterday we got the best slip of paper ever in the mail that cheered us all up immediately...TRAVEL PLANS!!!!  In the MTC when you get travel plans that means that everything went well with your visa and passport and such, so no need to worry anymore…I'm officially going to ARGENTINA on November 16th!!!!

Yesterday was probably my favorite day in the MTC so far...1) because we got our travel plans and 2) because it was our teacher, Hermana Richard's, B-DAY!

So the night before (Thursday), Elder Stockton had the brilliant idea to make a piñata.  Hna. Richard's favorite animal is an Orca Whale so he somehow made the shape out of cardboard and we then proceeded to cover it with tissues.  Let’s just say it was pretty incredible.  Especially considering the lack of resources we have here. 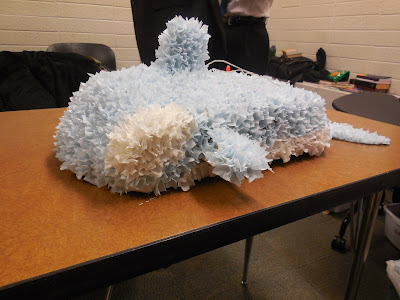 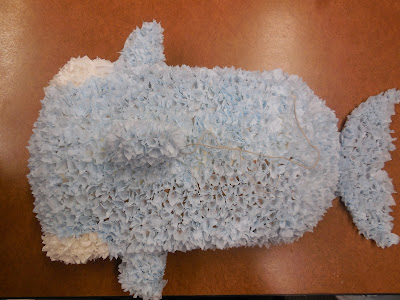 Last week he also got a package of birthday party stuff from his family so we had banners and party hats and streamers (we used toilet paper actually) and we cut out lots of paper balloons.

The best part though was what we came up with for her gifts.  In each classroom building there are bins for people to put notebooks, textbooks and really anything else they don't want any more (things you don’t want to carry with you when you leave here to fly to your mission country).  It's kind of like a lost and found, but anything you find in it you can take if you want.  Anyway, we all grabbed random Spanish textbooks and wrapped them up in pages we ripped from those same textbooks and then used crayons to draw pictures to look like wrapping paper.  Super classy, I know.  Hey, we did the best with what we had. :)

Now I bet a few of you are wondering when we had the time for all of this and why weren't we studying.  Well, worry not because during all of this we practiced telling each other stories in Spanish practicing the past tense.  Very productive and very awesome.

Hna. Richards loved the Orca and the party!  We ate lots of candy and sang Cumpleanos Feliz too.  It was a much needed break and for a great cause!  We are by far her favorite District ever. ;)

I'll finish this week with a spiritual thought that was shared by Elder Richard J. Maynes of the Presidency of the Seventy at our devotional this week.  He recounted an experience he had when he was speaking at the Missionary Training Center in the Philippines.  He was about to stand up to give his remarks and saw a painting of Joseph Smith praying in the sacred grove on the wall.  He said, "As I looked at that painting, I thought there he is.  Joseph Smith.  14 years old, representing every investigator ever.  Why?  Because he had a question.  There they are, Heavenly Father and Jesus Christ, the first missionary companionship of this dispensation, appearing to him.  Why?  To answer his question."  Elder Maynes encouraged us as missionaries to follow the perfect example of that first missionary companionship and find those that are lost and confused and simply answer their questions.

I had never thought of the First Vision like that, but now I don't think I'll ever be able to think of it another way.  I can't wait to follow the example of my Father and Brother and serve in Argentina with my fellow Hermanas, to try to bring our other brothers and sisters to the same sacred knowledge of the experience of Joseph Smith, and the restoration of Christ’s church here to the earth.  I'm grateful for his simple question every day of my life.  Without it, I wouldn't be here.  That's pretty cool if you ask me. :)

Well, I hope you all have a fantastic week!  Thank you all so much for all the letters, emails, packages and prayers!  I've said this before and I'll say it again...I'm the luckiest Hermana in all the world!  I Love you all so much!! THANK YOU!

1 month down... only 17 more to go... :(  However, the fact that for my second month-a-versary in December, I'll be in another country turns that frown upside down for sure. ;)

Funny story of the week.  So my companion has gotten lots of weird questions about her titanium prosthetic leg throughout her life.  Elder Johnson (the one that calls me Hermana Granger) decided he wanted to come up with a unique question she had never been asked before.  His question was "If you were flying toward the sun, which leg would melt first...?"  Ha-ha what?!  Too funny.  But then, without even trying, a couple nights later I beat his question by asking "is one leg heavier that the other?"  My comp looked at me super confused because she had no clue.  She said "I'm not sure, but you're welcome to come try to see (kind of jokingly)"  But you all know me.. I thought she was serious so I walked over to her bed and alternated lifting her ankles and came to the conclusion
(amidst her uncontrollable laughter because I was actually lifting her legs) that I couldn’t really tell a difference.  One day she’s going to have to figure out the real answers to these questions so that we can all sleep again at night ;)